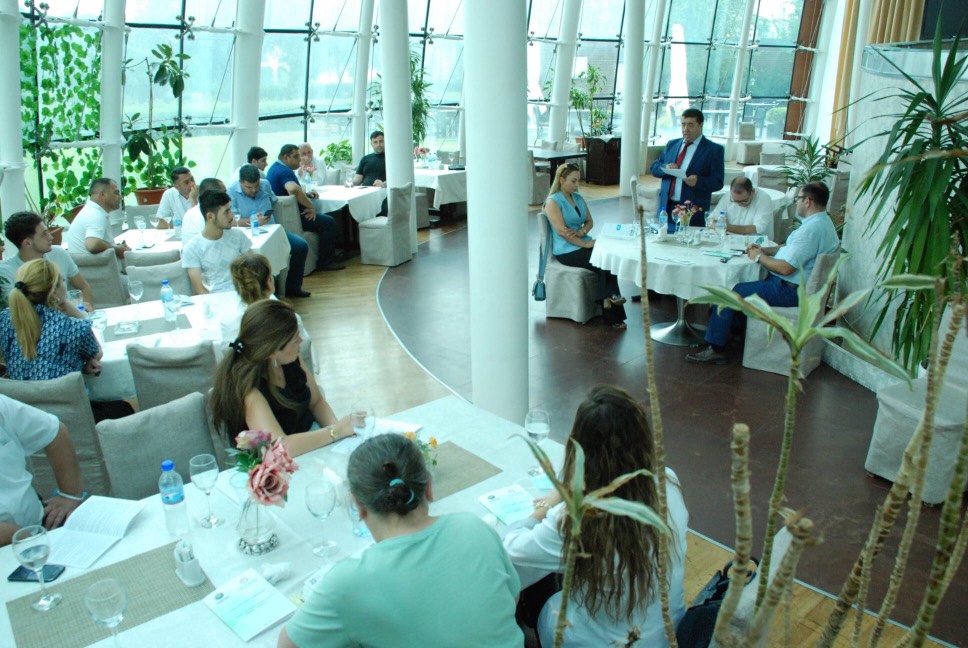 The Azerbaijani federation Xhidmat-ISH with the support of the international organization StreetNet held a number of educational and training seminars on the topic “Basics of social dialogue between  street vendors“, as we know the periodic discussion of the strategic task of social dialogue and tripartism in accordance with the mechanism for the implementation of the Declaration of Social Justice for a Fair Globalization was adopted in 2008 by the ILO.

What is social dialogue?

Social dialogue includes all types of negotiation, consultation, and exchange of information between and among representatives of governments, trade unions, employers and workers on issues of common interest related to economic and social policy. Social dialogue is both a vehicle for social and economic progress and an end in itself, as it empowers people with a voice and engages them in issues related to public affairs and jobs.

The main topic of the educational and training seminars was how to protect the rights of street vendors through social dialogue.

StreetNet itself began operations in Durban, South Africa in November 2002. Membership organizations (trade unions, cooperatives or associations) that directly bring together street vendors, market vendors and / or hawkers among their members are eligible to join StreetNet International. StreetNet aims to support the exchange of information and ideas on critical issues faced by street vendors, market vendors and hawkers (mobile vendors) and practical issues of organizing strategies and advocacy.

The organization has been closely cooperating with trade unions of Azerbaijan of the federation Xhidmat-ISH since 2012. In 2019 at the International Congress in Kyrgyzstan, the International Council composed by 15 leaders was elected. Jamaladdin Ismayilov was elected as Secretary. This choice was due to the fact that much is being done in our country to protect the rights of street vendors. A new market for street vendors was built in our country, and many were pleasantly surprised to see the conditions created for this category of working citizens. This is how new markets were built on the Baku-Gazakh highway.

This time, with the assistance of Streetnet, Xhidmat-ISH held a series of events and workshops. In addition to Baku, these seminars were held in Shemkir and Gabala.

The importance of social dialogue for street vendors

The event held in Baku was attended by representatives of state bodies, a representative of the State Labor Inspection and the Confederation of Entrepreneurs, the Union of Women Entrepreneurs of Azerbaijan. The host of the event was Jamaladdin Ismayilov, current Vice-President of Xhidmat-ISH, as well as the Secretary of the organization Streetnet. During his speech, he said that President of Azerbaijan Ilham Aliyev has strengthened the economic stability of the country. The state pays due attention to the development of small and medium-sized enterprises. Within the framework of the processes taking place in the republic of Azerbaijan, special attention should also be paid to the development of social dialogue between employers and employees, within the framework of collective agreements.

The event also highlighted that social dialogue plays an irreplaceable role in the implementation of the Decent Work program of our state. As to improve the condition of not only street vendors, but in general to improve the condition of the vulnerable part of the population. It was noted that in the future it is necessary to involve trade unions in training entrepreneurs.

Despite the fact that since January 1, 2014, the Baku City Department of Trade and Services has banned street trading, in the capital of Azerbaijan, Baku, you can still find people selling all sorts of things, from lemons and knickknacks to clothes.

However, the transfer of street vendors from the streets to an organized market, to avoid spreading unsanitary conditions, is a solvable problem. Fortunately, there are numerous markets and agricultural fairs in Baku. It is only necessary to create acceptable conditions for people to trade at the above facilities, and not on the street.

Given the conditions of the Covid-19 pandemic, compliance with sanitary and epidemiological conditions is necessary for the eradication of the virus. For the improvement of the condition of street vendors, it is necessary to cooperate within the framework of social dialogue, both tripartite and multilateral cooperation in this direction.

The Azerbaijan Federation Xhidmat-ISH as well as the international organization Streetnet is interested in holding these educational events to educate and motivate the involvement of street vendors in the trade union movement.