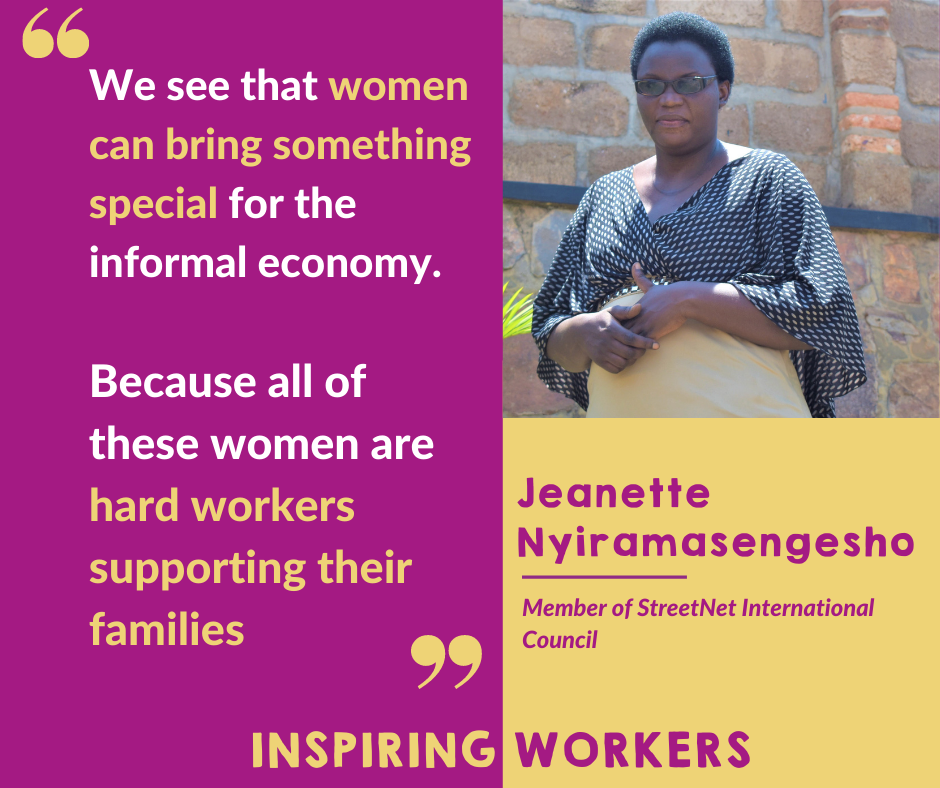 Jeanette Nyiramasengesho is the President of SYTRIECI, a trade union of informal economy workers in Rwanda. Since her childhood, Jeanette has devoted her life to building solidarity and was a pioneer organizer of informal economy workers in her country. She is currently a member of the StreetNet International Council devoted to women’s leadership and strongly encourages young people to become more involved in the collective fight for street vendors’ rights.

Growing up learning about solidarity

Jeanette lives in Kigali, the capital city of Rwanda, with her four children – three boys and one daughter – and her husband. She is 42-years-old, with an impressive track record as a defender for the rights of informal economy workers.

Jeanette is the second eldest child of her family, which includes six daughters and three sons. Such a family would already be large, but her father, a pastor, adopted another eight children of vulnerable backgrounds, particularly those that became orphans after the 1994 Genocide perpetrated against Tutsi in Rwanda.

Therefore, Jeanette spent her childhood surrounded by a big and loving family. Her father was a role-model who taught her about solidarity and helping other people. He created associations, schools and parishes throughout Rwanda and Jeanette started to assist him in his work since a young age. “I started helping in my own small way”, she explains.

After getting her diploma, she worked as a teacher for two years and then became the accountant of the secondary school where she was teaching. There, she had the opportunity to work with children for many years, but Jeannette wanted something more. She married in the meantime and decided to get back to university, where she obtained a Bachelor’s degree in Sociology.

Discovering the struggles of women in the informal economy

After becoming a graduate in Sociology, Jeannette struggled to find employment. She had left her position as accountant in the school to pursue higher education, but now she could not find other jobs.

Jeanette wanted to work to help support her family. “Even though my husband had a job, as a woman, I thought it was necessary for me to contribute as well” she says. Therefore, she decided – as many other women do throughout the world – to turn to the informal economy and start selling goods in the market.

She became a market vendor for two years. It was during that time that Jeanette first came into direct contact with the hundreds of other women street vendors and discovered how much they suffered.

One day, after Jeanette had already stopped working in the informal economy, a woman vendor came by her house.

“Here, in Rwanda” explains Jeanette “many informal traders go door to door to sell their goods. One day, a woman came to my house and asked me to buy something. I noticed she had a one-week-old baby with her. It was terrible. I asked her to tell me about her story, because I could not imagine how a woman with such a small child could go around selling”.

The woman’s husband had left her with another baby when she was pregnant. They did not have a house, so she was forced to go to the streets, to find food for her children. “When I listened to her, I was scared. When I was working in the market, I heard many stories, but this one touched me, so I decided to see how I could help her. I bought what she needed, but that was not the solution. I asked myself – what can I do for these women, that are selling in the streets, that are suffering, are being abandoned by their husbands with children?”.

As a trained sociologist, the question did not leave Jeanette’s mind. She decided to stop looking for another job and instead devote her time and energy to support these women street vendors.

Jeanette called the street vendor woman who had shared her story and told her to bring more women. She started to organize meetings in her apartments. So many women came – Jeanette could not have imagined such a big number.

She sat with them and asked them to explain, one by one, what their problems were and see if they could come up with solutions together. Seeing the large number of women gathered, Jeanette thought that they might try to create a formal structure, but was not sure what kind it should be – an association, a cooperative? She went online and understood that, given the needs and demands of the women, a trade union would be more suitable.

Jeanette suggested that the women started organizing themselves in groups. “I told them – we are going to create a trade union, which will help us expose our issues and approach authorities”. Still, she knew it would not be easy. In Rwanda, as in many countries, informal economy workers are not easily accepted.

But Jeanette and her comrades carried on. They drafted regulations and a constitution and obtained the necessary documents to become formalized as the Union of Independent Informal Economy Workers [Syndicat des Travailleurs Independents de l’Economie Informelle] – SYTRIECI.

Although the trade union was created by women, many men eventually joined as well. SYTRIECI started to approach authorities and voice their demands, asking for recognition. “We managed to get some amendments in the law about informal economy workers” says Jeanette “because we were there expressing our issues”.

The trade union was started by street and market vendors but grew to include other sectors of the informal economy as well. According to Jeanette, it was government officials who encouraged her to reach out to domestic workers, who did not have any association at the time. “I accepted, because I started to see that there were many types of informal economy workers who were not organized. And also because many street vendors had been domestic workers before and started selling after losing those jobs”. It was a good strategy to bring on board different sectors and start working together.

Jeanette first found out about StreetNet’s existence online and was eager to get in contact with the organization. She was invited by the founding International Coordinator, Pat Horn, to a meeting in Tanzania, where Jeanette had the chance to present SYTRIECI and ask for affiliation to StreetNet. After following the due process required for the organization to become a member, SYTRIECI became affiliated to StreetNet in 2015. It was great news for the organization.

“I cannot express how happy we were” recalls Jeanette “When we told our members, they were so happy, crying and clapping”.

In 2016, SYTRIECI participated in the 5th International Congress in India. She learned that it was possible to apply to become an International Council member and decided to do so. She was elected. “That was very good for me” she says. One thing Jeanette was grateful for was how membership years were not the decisive factor for elections, but rather ideas and activities. “They thought I could contribute with my efforts, even though we (SYTRIECI) were a very young member of StreetNet”, having joined just the year before.

For Jeanette, being in contact with fellow trade unionist, activists and informal economy workers from different countries is an enriching experience. She also credits StreetNet founding coordinator Pat Horn and current International Coordinator Oksana Abboud for encouraging her to pursue her activities organizing informal economy workers in Rwanda.

“I always look at what we need, at what our objectives are. When I saw StreetNet objectives and how they are helping associations and trade unions of informal economy workers and I saw the experience, it encouraged me to continue my activities nationally and to bring my contribution at international level.”

The importance of women leaders

The catalyst for Jeanette to devote her life to informal economy workers was the plight of women street vendors, and she has now years of experience leading a national organization. As such, it is no wonder that Jeanette values women’s leadership and their abilities to understand issues affecting vulnerable workers and coming up with solutions.

“Women are the pillar” she explains “A woman needs to be strong, to participate and to bring solutions, to both family and societal issues. To keep women away from leadership is to destroy your development. A woman can bring many positive contributions. And we are able to achieve more.”

In Rwanda, women are well-represented in government and parliament. So, for Jeanette, it is natural to see women taking the lead, and she was happy to see that StreetNet values and encourages women’s leadership in the same way. For Jeanette, it is particularly important to recognize the resilience of women informal economy workers.

“It is not easy to sell in the streets, to have no stability. It takes a lot of effort by the women. When associations are led by them, it is easy to understand the issues and they can bring solutions. Even when women are not educated, they always put in the effort to support their families.” Says Jeanette “In StreetNet, we see that women can bring something special for the informal economy. Because all of these women are hard workers supporting their families”. Jeanette adds that women play a key role to change society and to contribute to the transition from the informal to the formal economy.

Advice for young organizers of informal economy workers: “You need to know and listen to the workers”

When asked what Jeanette would advise young organizers of informal economy workers to do, she is adamant that the most important thing is to listen, to understand the issues by sitting down and being with the workers themselves.

“It is not easy to organize informal economy workers” she warns. “You have to be on the ground. You cannot have a top-down approach”. For Jeanette, it is also important to keep in mind the struggles informal economy workers face on a daily basis. “Because these workers suffered a lot and, in many countries, they are not accepted, they face many challenges, including psychological and financial. You must have skills to organize and you must also have a passion for that activity”.

Jeanette strongly encourages young people to take the lead. “There are many thousands of workers in the informal economy who are not organized so I encourage young people to not be afraid and to create associations. That will allow us to transition from informal to formal following ILO R04. We need young generation to organize. I encourage all those young people to make efforts. Even if it is complicated, it is possible.”

Jeanette continues to work towards the goals of SYTRIECI, along with her comrades at national and international level. For her, it has become a lifelong mission. “Fighting for informal economy workers’ rights is not easy” she states “It is a passion. Something that comes from within you. And it is what I decided to do”.