On May 23, 24 and 25, 2022, the StreetNet International Americas Regional Meeting took place in São Paulo, Brazil.

Leaders of organizations of  StreetNet affiliates representing street vendors from 11 countries (USA, Mexico, Guatemala, El Salvador, Nicaragua, Costa Rica, Dominican Republic, Colombia, Uruguay, Brazil and Chile), StreetNet affiliates met to discuss the challenges and paths of street vendors in the region and plan the organization’s objectives and goals for the next period. The meeting, which took place at the Polis Institute also had the virtual participation of street vendors representatives from Honduras.

The face-to-face meeting had not taken place in the region for a long time and was the first in-person activity in the region after the pandemic.

The Brazilian affiliate organization UNICAB (União Nacional de Trabalhadores/es Camelôs, Ambulantes e Feirantes do Brasil) hosted and organized the logistical and methodological part of the meeting in the previous two months, in partnership with the SNI office and in frequent dialogue with the Regional Focal Point, coordinated by the organization of El Salvador FESTIVES which promoted some online meetings with the leaders of the region to prepare for the meeting.

On the first day of the meeting, UNICAB proposed a seminar with various allies of the street vendors’ struggle in the country and in the region to collectively reflect on the current situation in the world of work, especially in relation to work in the informal economy and in the street vending sector.

The seminar “Challenges and paths of the international struggle of informal economy workers” had as speakers Jordania Urena from the Trade Union Confederation of Americas – TUCA, Pat Horn Senior advisor at StreetNet and member of the international organization Women in the Informal Economy Globalizing and Organizing– Wiego, by Anne Sena – Central of Cooperatives and Solidarity Enterprises – Unisol Brasil, Ivone Aparicio – Union of Workers of the Popular Economy – UTEP/Argentina and of the Brazilian Federal Deputies responsible for the Parliamentary Front for the Defense of Workers in the Informal Economy Vicentinho, of the Workers Party (Partido dos Trabalhadores – PT) and Samia Bonfim of the PSOL Party. The seminar also counted with the participation of the former senator, current city councilor and worldwide defender of the universal basic income Eduardo Suplicy (PT).

In addition to having the mediation of the Focal Point coordinator Hermínio Diaz, and the participation of the vice president of StreetNet Alberto Santana (FUTTEINCO – Dominican Republic), Juliano Fripp (Unicab – Brazil) and the organizer of StreetNet for the Americas Maira Vannuchi.

The debate was extremely relevant to analyze the challenges of the world of work, such as the gradual increase in work in the informal economy and the pressing need to develop strategies for organizing and strengthening precarious workers towards their rights defense in the face of major global economic transformations. No matter the origin of the worsening of poverty and inequality, such as the COVID-19 pandemic, migratory flows, war, economic recovery plans for countries and people in socially vulnerable situations, passes through entry into the popular economy. Therefore, many governments are again considering the introduction of previously abandoned basic income guarantees and social protection, for a more inclusive economic recovery from the economic crisis.

The social solidarity economy plays a decisive role in this process, as it builds solidarity, class identity and unity among workers in the informal economy, in addition to providing instruments for the creation of collective ways to respond to problems common to all.

We had the opportunity to learn about some inspiring experiences for the street struggle in Latin America, such as the Union of Workers of the Popular Economy (Union de Trabajadores de la Economia Popular – UTEP) of Argentina, a national trade union organization that represents workers in the popular economy and their families and which aims, according to them, to be a tool for struggle for the restitution of labor and social rights that neoliberalism took away from workers and which workers have not yet recovered.

UTEP has been conducting a successful experience, a tradition of the piqueteros experience, of territorial organization in the neighborhoods, together with the construction of alliances of workers of the popular economy of the different sectors. Their work allowed them to conquer in 2016 a very important recognition of workers in informal economy, by approving the Social Emergency Law and the payment by the federal government of a supplementary social wage of 50% of the minimum wage, understanding that if the country is not able to offer formal jobs to everyone, the State must be held responsible for the vulnerability of those who work in informality. UTEP also brought some experiences of solidarity economy among workers in the popular economy in the country.

Another important experience was to get to know, through Brazilian parliamentarians present at the seminar, the process of building a Parliamentary Federal Front in Defense of Labor in the Informal Economy. The idea is to articulate with organizations representing informal workers, such as the StreetNet affiliate Unicab, to build national policies in defense of the rights of all these workers of different sector of informal economy, advancing in the construction of a public debate and of a common political reading on the world of work that inserts this huge portion of the country’s workforce in labor and social security rights. The formation of the Front is the result of advocacy efforts by Unicab, which underwent training in negotiation skills offered by StreetNet and WIEGO in 2019.

After analyzing the situation with several allies, starting from a joint reflection on the challenges and paths of the world of work today, the group of street vendors’ leaders plunged in the following days into StreetNet’s strategic planning in the region for the next period.

Through dynamics, group work and plenary debate, the various stages of planning were carried out, with the evaluation of StreetNet’s work, successes and errors, followed by an analysis of the main challenges faced by street vendors in the countries, which favored a mapping of the main problems common to all and a collective reflection on what would be the ways to act on these challenges. 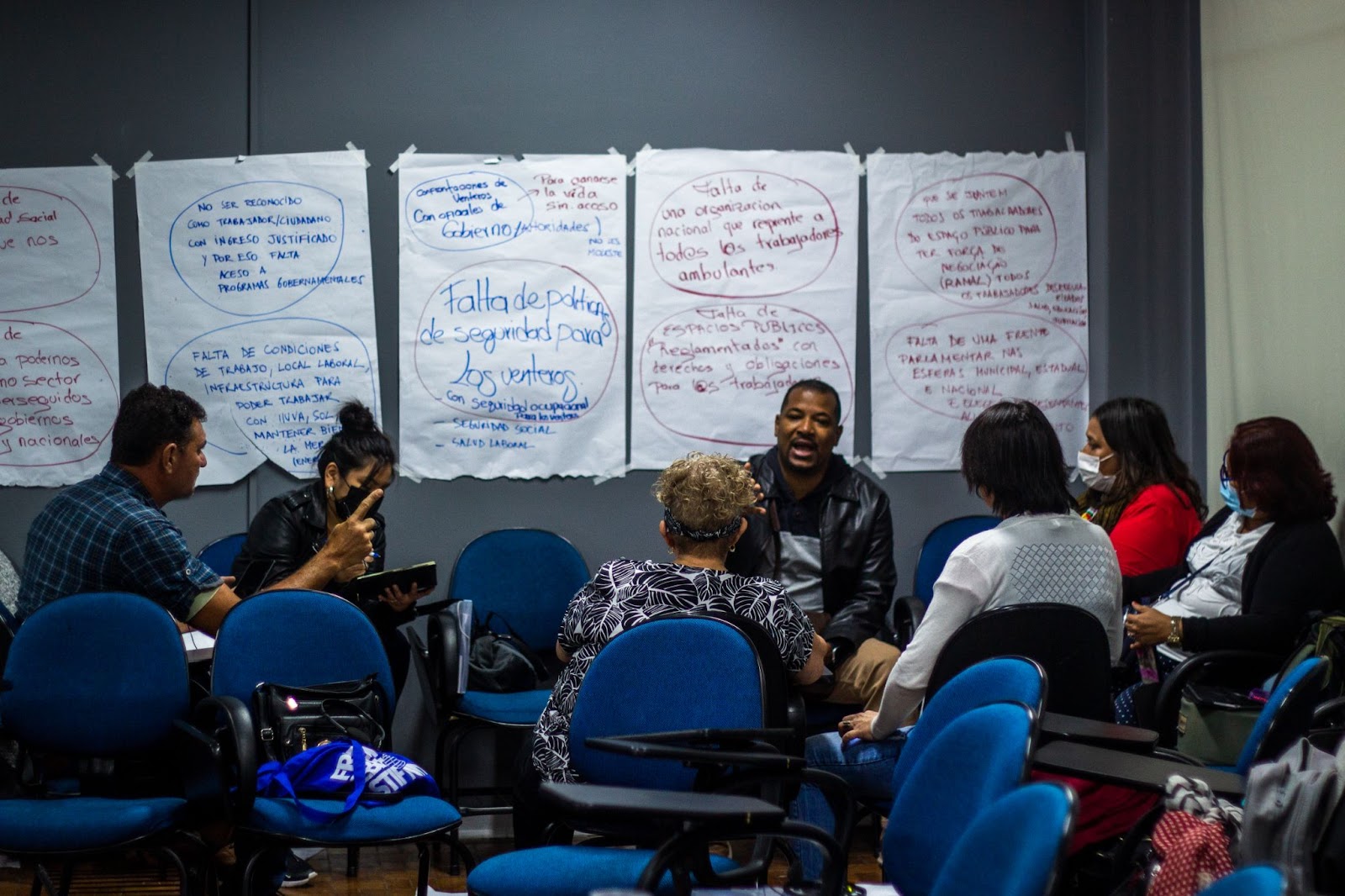 The representatives were then exposed to the current strategy underway at StreetNet and the strategic priorities, in order to formulate, based on the path taken in the activities days, the objectives and goals for StreetNet’s regional work in the coming years.

StreetNet’s international coordinator Oksana Abboud, virtually facilitated a stage of the work focused on making StreetNet’s governance structure clear to everyone, who are the elected leaders and their roles and how the organization works, which is guided by recommendations taken at an International Congress , which takes place every four years (the next one will be in 2023). With this, it was possible to clarify doubts and work with the leaders of the Americas their ideas and proposals for the main political-decision-making moment of the organization next year.

The meeting included a field visit to one of the largest street vending centers in Latin America, the Brás dawn market (Feirinha da Madrugada), where the group went at dawn to get to know the work of local street vendors and have an on-site experience.

The participants reported in their evaluation a great deal of satisfaction with the meeting and the feeling that we had worked hard and made significant notes for the organization’s paths, making the most of the unparalleled opportunity of the face-to-face meeting, strengthening ties and renewing the energies for the struggle.

The meeting was indeed a success thanks to the work of several people affiliates and staff, such as Pilar Balbuena, international advocacy advisor and Annelene Shahbaz, financial and administrative director of StreetNet, in addition to the local management of Unicab and its committed advisors and last but not least, the representatives of each country who, in a focused and energetic way, worked intensely to take advantage of the meeting and to make our motto “Nothing for us without us”.

See a video summary of the meeting below: