"We learned about rights, how to talk with local authorities, how to solve problems, and when to get further help." 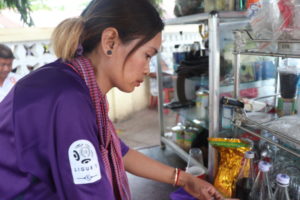 Street vendor Dy Thona also looks to the future, always thinking of ways to bring more security to her livelihood. Thona operates a cart on a busy street just outside the gates of a hospital, doing a brisk trade in hot noodle soup, coffee and tea, cigarettes, and cold drinks. Customers, including hospital

visitors, patients and staff, and passing tuk-tuk drivers, often stop to eat at the table and chairs she’s set up nearby. Behind them, roosters crow through the hospital grounds while on the street, cars, tuk-tuks, and motorcycles speed by.

Thona looks tired from years and years of vending, but her passion in improving her conditions holds firm. She herself laughs when she comments on her singularity of focus, saying “Even when I am at home or at IDEA meetings, I am thinking about what I can do with my stall.”

Thona is 37 and has been vending for close to 20 years. As she says, with a grade eight education, “I didn’t know how else to survive. I didn’t have skills.”

When she began vending, she was harassed by local authorities daily though the why, when, and where they wanted her to move fluctuated daily.

“We learned about rights, how to talk with local authorities, how to solve problems, and when to get further help.” 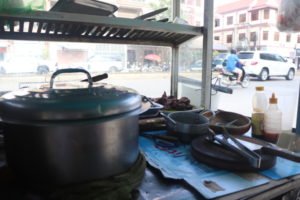 “Everything seemed dark,” she says. “I couldn’t understand the reasoning or policies. I didn’t know how to speak. I had a fear of selling here. I didn’t know what to do, or what I could depend on.”

But in 2007, during one particularly long campaign to remove vendors from outside the hospital gates, a tuk-tuk driver spoke with Thona about the benefits of joining IDEA. She began participating in trainings from negotiation to advocacy. These trainings, says Thona, “educated us, helped us learned. We learned about rights, how to talk with local authorities, how to solve problems, and when to get further help.”

Today, Thona is not afraid to speak up. When authorities ask her to move, she is able to ask why and to refuse to move. As a result, her income and space have greater security. More, the authorities now listen to her, and because of this, she is able to help solve problems for other vendors.

In fact, over the 11 years of her membership, Thona has not only become a leader in her community, but also a leader within IDEA as a whole—she was the elected representative for street vendors on IDEA’s General Counsel for two terms.

Her work there took her to India for an Exposure Dialogue visit with members of the Self-Employed Women’s Association (SEWA), a national union of self-employed, poor women workers, including street vendors. 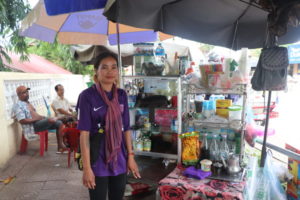 Like IDEA, SEWA is also a part of StreetNet International. Membership in StreetNet regularly brings about this kind of global collaboration, which increases an organization’s (and its members’) awareness of options for organizing within the informal economy.

Thona smiles broadly when she’s asked of this visit. “The food was very difficult to eat,” she admits. But then, with seriousness, she speaks of what she learned from SEWA, like its focus on women, on literacy, and on empowerment through the individual and family.

She was especially impressed by SEWA’s non-violent approach to problem solving and how it can bring about profound change in fighting evictions. She also learned about other services SEWA offers, like the credit and savings banks and low-interest loans it provides for its members. 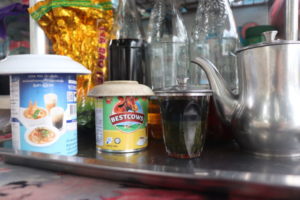 Thona believes similar access to low-interest loans through IDEA would help her achieve more income security. With such a loan, she dreams she could open a small shop in her home—a hope many vendors share but cannot achieve because of prohibitive start-up costs. Not only would a shop in her home lessen harassment from authorities and the worrying threat of eviction from road redevelopment, but it would provide Thona with more stable income as she would no longer have to worry about closing the stall due to storms, heavy rain, or traffic accidents.

A shop in her home would also help her mitigate against age—currently, Thona has to move her cart and goods from storage to the vending site and back every day, a job that is heavy and difficult. Finally, a shop would protect her from the potential violence that many women vendors throughout the world face. Read  more about how IDEA creates change by downloading the PDF.