"Before, we didn’t know our rights, but now we know we are citizens. We can solve our problems."

Right at the edge of the road, just outside the hot, humid, and busy Phsar Douem Kor Market in Phnom Penh, Cambodia, Nub Souen, her children, and grandchildren sit in the shade under a patchwork of tarps. Here, Souen, a street vendor, spends each day, from six thirty in the morning until nine at night, selling potatoes and small juicing oranges. Her children, ranging in age from 3 to 14, also spend many hours here. The older children are out of school for the summer, and, in Cambodia, younger children don’t begin school until age 6. 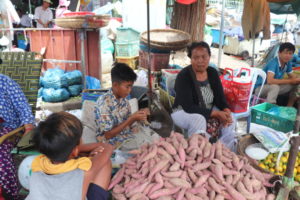 This is the same vicious cycle mothers and grandmothers who work as street vendors throughout the world face: they may, at times, make enough money for survival, but rarely do they make enough for childcare.

And as workers in the informal economy, they do not have access to social protections and programmes that would help their families gain more security. Yet, like Souen, street vendors persist, working hard every day in the hopes of supporting their families and educating their children in order to break the cycle of poverty.

“Before, we didn’t know our rights, but now we know we are citizens. We can solve our problems.”

At 50, Souen has been working as a street vendor for 14 years, and she has dark circles under her eyes from the long days and from the worry—one of her children spent the previous day in the hospital for a fever and intestinal illness, an 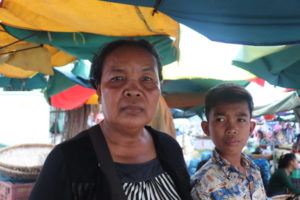 added cost to the family. Still unwell, he hovers nearby, wet cloth to his forehead as the younger children play on a parked tuk-tuk.

While the children may be bored or sick, Souen is grateful that at least they are safe. When she began street vending, the family faced harassment that verged on violence. As Souen recounts, her children were then very small, and police would sometimes haul them on to the back of the police truck and threaten to throw them in the garbage.

This was just one of the difficulties the family faced on a daily basis—security guards also harassed them, and local authorities demanded bribes against evictions. As Souen says, police would often simply take their goods. On those days, when, as now, every penny counted, the family would earn no income.

But when an IDEA organizer visited the market in 2013, these threats to Souen’s income began to change. IDEA, or The Independent Democracy of Informal Economy Association, is a unique and strong leader in Cambodia’s labour landscape. 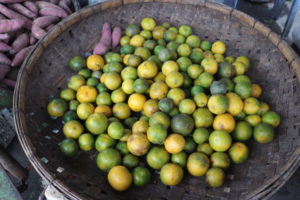 Unlike many Cambodian unions, IDEA is not associated with any political party and remains committed to independently improving the economic and social conditions of informal workers like street vendors, domestic workers, tuk-tuk and moto-taxi drivers, and waste pickers.

It’s no surprise, then, that when Souen told the IDEA organizer about the police harassment, particularly with the children, IDEA took the problem to authorities and to the media, even drawing the attention of the Prime Minister. The case became a major story, and the police were forced to stop taking these actions.

Now, the police no longer threaten to throw children away, and authorities, as Souen says, “know better than to ask IDEA members for bribes.” Many vendors, especially those who are not members of IDEA, are still evicted or asked to move regularly, but when Souen is asked to move her stall, usually it is just a little further back from the roadway.

For Souen, life at the market has improved in other ways since she joined IDEA. Because of the trainings she has taken through IDEA, she knows her rights and has learned how to advocate for 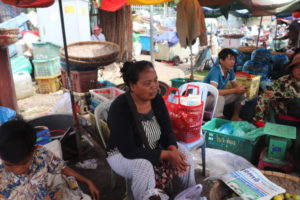 herself and for other vendors.

She has become a local leader. When other vendors experience problems, Souen accompanies them to meet with the market manager. Now, the market manager listens, and security guards respect her. If the problem still isn’t solved, Souen says, “We have hope because we know IDEA will come. There is support. This makes me feel confident.” Read  more about how IDEA creates change by downloading the PDF.