"I am able to do any work where there is need."

Sushila Rathore is a SEWA leader and a vendor who relies on informal income to support her family. Like her SEWA sisters, because of SEWA, she has overcome many systemic barriers placed on her by her gender and poverty.  And, she says she has created and achieved many things she couldn’t have dreamed of.

At 56, Sushila radiates warmth and has a ready smile. Her kind nature shows in the way she speaks with her daughter-in-law, who is quick to serve tea and homemade sweets, and with her granddaughter, who toddles about between rooms.

As is the case for her sister SEWA leaders, Sushila is the person people in the community come to when they need help with a health crisis, when there is a situation that calls for emergency workers, or when there is a need for negotiation with local authorities. In this capacity, she also organizes events around International Women’s Day, Independence Day, and other major holidays.

This is a life that has taken Sushila many years to build. When she was a young woman and just married, she and her husband, Mohan, lived with her parents and six brothers-in-law until the housing conditions and crowding forced the couple to move to Adarsh Indira Nagar. They had very little money, and, in order to earn some income, Sushila sold her jewellery so the couple could buy a cart, from which Mohan sold the namkin, or sweets, Sushila made. 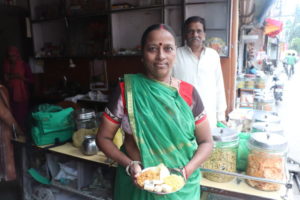 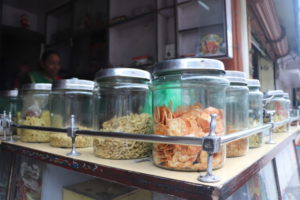 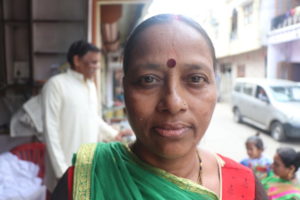 This income, though, was still not enough. Mohan suggested they open a small shop in their home, and, like many informal economy workers, they took out a high-interest loan from a money-lender, using it to buy some small-batch equipment despite the struggle with loan interest.

Soon after that, SEWA organizers visited the shop. It took some persistence for them to convince Mohan to let them speak with Sushila. Their commitment paid off, and when they explained the benefits of membership to Sushila, she quickly joined.

She began attending meetings and classes—even when her family didn’t approve of her going out. She learned to read and write, which has given her autonomy in business and household matters—as she says, “I am able to do any work when there is need.”

Her business as a whole has also seen benefit from her association with SEWA. Through a low-interest SEWA loan, she was able to purchase more equipment to produce and sell larger quantities of namkin. Her market expanded to Bombay and Jalgeon, and when profits declined after 2001, SEWA members gave Sushila the idea to make up the difference in income by opening sweets stalls at special events and festivals.

Sushila’s participation in festivals grew from there. With SEWA’s help, she has participated in street food festivals organized by Streetnet affiliate NAASVI in cities like Patma and Delhi, where she even won an award for her moong dal halwa, a specialty dessert. She’s further refined her cooking skills through a program SEWA helped organize with a polytechnic institute in which she learned how to cook with measures. This certificate training has opened new doors into more commercial opportunities.

The success of Sushila’s business has also brought more security and opportunity for her family. Since joining SEWA, Sushila has continued to save through the SEWA Credit Cooperative, and in 2001, with the assistance of another SEWA loan, the family was able to build a two-story brick house. Each of their three children have earned university degrees. The family has been able to take occasional vacations to pilgrimage sites like Gangasajar, Hyderabad, and Rameswaram. Read  more about how SEWA creates change by downloading the PDF.