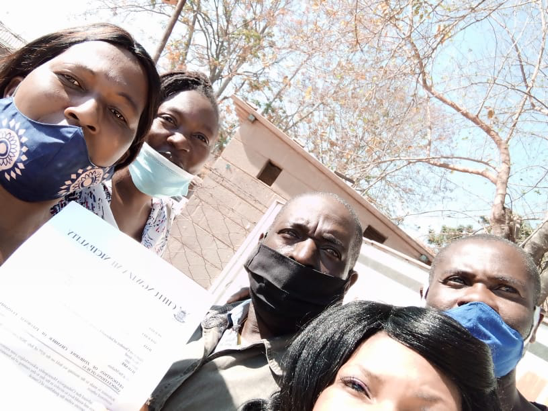 You can also listen to an audio version of this article in our podcast. Listen here >>

Sunday, July 5, was supposed to be just another day for informal traders in Chitungwiza, a suburb in Zimbabwe’s capital, Harare.

Informal traders in Zimbabwe always had to struggle with harassment from police officers. Even though most of the population works in the informal economy, authorities have never treated informal traders kindly. Arrest and confiscation of goods are the routine, and the government has led several operations to penalize and eliminate informal economy workers in recent decades.

However, the events on July 5 were shocking even for Zimbabwe standards.

It all started with a police raid in Jambanja Market. Ever since the lockdown, harassment and violence against informal traders had intensified. Structures of informal traders were demolished, and they were blamed for spreading COVID-19.

When police entered the market with the intention of arresting traders and confiscating their goods, Samson Chamunorwa Zharare immediately tried to flee. Samson has been vending for about 5 years, so he knew what to expect. He jumped on the driver seat of his car ready to leave.

Suddenly, the police officers fired two shots. One of them hit Samson on the leg, causing a large wound. Traders were alarmed and panicking, some managed to snap pictures of the situation. As some police officers attempted to disperse the crowd, others drove off with Samson. He was taken to a clinic to receive treatment for his serious gunshot wound.

As news of the shooting spread and civil society started to denounce the situation, the police quickly re-adjusted the story. Samson was accused of attempted murder and resisting arrest for allegedly trying to run over police officers, and he was subjected to a trial as he recovered in the clinic. He was under arrest since July 8 and High Court Judge Justice Chitapi granted him a RTGS$ 5000 bail on July 21, although Samson did not commit these crimes and will probably require complex surgery to regain the use of his leg.

In April 2020, ZCIEA had already denounced the situation in Chitungwiza. The territorial leader of ZCIEA responsible for that area, Ratidzo Mfanechiya, gave a striking video testimony about traders’ struggle for survival.

During the lockdown, many of the structures of informal traders were destroyed. Although traders tried to fight that decision in court, their application was dismissed.

In order to re-open their businesses, informal traders must register, which involves paying a license to local authorities and for tax clearances. However, informal traders are not able to afford the high cost – they live from hand to mouth and their income does not cover the expenses registration requires. Although ZCIEA is encouraging its members to formalize, the unaffordable costs locks traders in the informal economy.

ZCIEA representative Fungai Munetsi explains that informal economy workers have always been blamed whenever an outbreak happens. Whether it is cholera, typhoid, or COVID-19, workers who are pushed to the informal economy due to economic crisis are considered to be infectious agents and are therefore persecuted in the name of public health.

The COVID-19 pandemic is only the latest chapter in Zimbabwe’s history of violence against informal economy workers, particularly traders.

A track record of violence against informal traders

In 2005, Operation Murambatsvina – “Clear the Filth” – was one of the most violent and aggressive pushbacks against informal traders in Zimbabwe’s history. Led by the Zimbabwe government under former President Robert Mugabe, it resulted in homes and workplaces being demolished and it shocked the world.

In 2019, it seemed like history was repeating itself. StreetNet International issued a solidarity statement criticizing what seemed to be Operation Murambatsvina 2:

“In the current atmosphere of intimidation and sporadic media cut-offs, the snippets of information which manages to filter through about the demolition of homes, tuckshops, markets and other vending structures, the beatings of vendors whose offence is trying to eke out a living in an extremely weak economy, creates a consistent image of the worst forms of violence and harassment in the world of work (…) StreetNet considers such actions towards our sisters and brothers in Zimbabwe, brutal, unacceptable and in violation of their human and worker rights.  In an economy where less than 15,5% of all working people in Zimbabwe are paid employees with permanent contracts, forcing a large proportion of workers in the labour force to work in the informal economy workers, proper dialogue and a bottom-up and solution-based approach, rather than forced removals which victimise informal workers, would be more appropriate.  These workers have a right to earn a living for themselves and their families.”

Despite calls for the Zimbabwe government to change attitude towards informal traders and negotiate solutions, it seems the persecution of informal economy workers is only getting worse. Samson’s shooting was shocking, but ZCIEA is not even able to keep track of how many workers have been harassed or assaulted since the beginning of the year. “He was the first to be shot, but when it comes to harassment there are many” says Fungai “People want to survive, but the authorities are making it difficult.”

As Fungai says: “Informal economy workers have been harassed and chased away from times immemorial”. However, ZCIEA is making a difference at the local level.

To contradict the misconception that informal traders spread viruses, ZCIEA is providing masks and sanitizers according to available resources. Most of their members are careful to wear masks and trying to comply with public health guidelines.

ZCIEA also invests in building relationships with local authorities, to ensure there is a dialogue between informal traders and decision-makers. They have already signed several Memorandums of Understanding, but authorities willing to partner with them are still a minority.

At a time when the #BlackLivesMatter movement sparked several protests in various countries against police brutality, the unique vulnerability of informal traders to harassment and assault is still not common knowledge.

Police violence against informal economy workers in Zimbabwe is not an isolated incident. According to Fungai, violence and harassment are on the rise against the general public as well, and people are being persecuted for not complying with regulations. Not wearing a mask, for example, results in a fine of RTGS$ 500, a hefty amount, and police officers harass those who do not comply or are unable to pay the fine.

But the shooting at Jambanja Market is a clear turning point. Not only has a street vendor been violently assaulted, which may result in Samson having a disability for life, but how the story was turned around to portray police officers as victims of attempted murder retaliating in self-defense is even more alarming. Instead of holding police officers accountable, Samson’s story is a dangerous cautionary tale to intimidate informal traders in Zimbabwe – even when they are the ones being shot, they are still presented as criminals.

When ZCIEA was aware of Samson’s shooting, its members released a statement denouncing police brutality against informal traders:

“ZCIEA represents the informal economy workers in Zimbabwe and by such, we cannot ignore this bad incident. The unfortunate incident shows that the Police are not carrying out their mandate to protect the public but instead are now brutalizing innocent traders trying to earn a living. Using live gunshots on civilians is uncalled for. This action by the Zimbabwe Republic Police is not new as they are ever at loggerheads with the informal economy workers raiding their wares and confiscating their goods. The informal economy in Zimbabwe can’t breathe due to Police brutality. Such militant acts on the Informal economy workers and traders must Stop forthwith. (…) It is a shame to realize that the State security agents are using COVID-19 lockdown to prey on informal traders or put up an operation on the poor, innocent citizens of Zimbabwe who equally have a right to life and employment without any stakeholders’ consultations. Such characters are a threat to societal development. We all want a happy, healthy, friendly, and peaceful country full of accountability and human rights respect. Our collective effort should be to fight COVID-19 and not the vendors.”

“We urge the Zimbabwean government to adopt a more inclusive way of dealing with street vendors in Zimbabwe through negotiations with organizations of street vendors (…) We further urge the Zimbabwean government to release jailed civil society activists and trade unionists, and let the law take its course in accordance with internationally accepted standards and respect for human rights.”

Informal economy workers deserve to be heard, support and assisted – they should never be brutalized for trying to survive!

The situation for informal traders in many countries is still critical. Now, more than ever, their essential contribution to social and economic development must be recognized.  StreetNet International is mobilizing all their affiliates and supporters to promote the rights of street vendors, hawkers, and cross-border traders during COVID-19 pandemic crisis. Follow us on Facebook and Twitter, and amplify our message