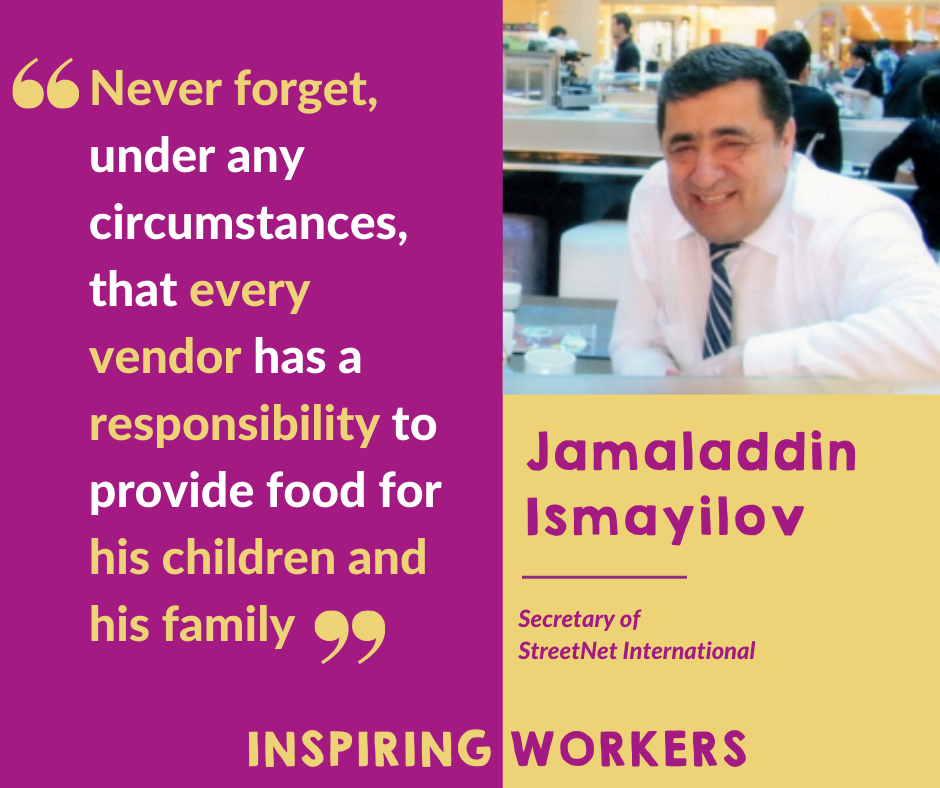 Jamaladdin Ismayilov, also known as Jamal, is the current StreetNet International Secretary. From his youth as an informal economy worker to becoming a trade unionist advocating for street and market vendors’ rights, Jamal has always remained a devoted family man with strong work ethics.

Jamal was born in a mountainous village of Slavyanka, in Azerbaijan, along with an identical twin brother, Fakhraddin. He spent his childhood in this region with his parents, his twin brother and two sisters, attending a rural school and engaging in cattle grazing and agriculture. Although the conditions were harsh and his family was poor, Jamal treasures his childhood memories and speaks of them fondly.  “I especially remember the walks with my friends through our beautiful mountains”, – he says, “It is interesting that even though we lived very poorly, we were happy and friendly”.

It was common for children to assist their parents in making a living. Jamal helped his parents to plant and harvest potatoes. “We were a family and were obliged to help our parents in everything”, – he explains. Jamal’s father worked as a trader. When the time came, Jamal and his brother joined him and became sellers as well. Every day, after school, Jamal would go to the market and trade along with his father. It was during this time that he became, according to his own words, addicted to selling water.

“Let me explain”, – he says: “Two kilometers from our village, sparkling water gushed from under the ground. This is a beautiful sight, which everyone called Narzan and is still called so today. So, I saw that many people in the village loved to drink this water and decided to go to this source in the morning and collect dozens of bottles of water. I brought them to the village and sold this spring water (which was very cool) for 10-15 kopecks per liter!”

Once Jamal and his brother finished school, their father gave each of them 120 rubles and offered a warning and an encouragement: “There is no more money. Whatever you might want to do, try to enter a higher learning institution, and get an education. If you do not, then blame yourself – you will graze sheep in the village.”

Jamal and his brother followed their father’s advice. Along with five other young people from the village, they left their home and headed to the city of Kharkov, Ukraine. As Jamal explains, Kharkov was the city with the highest number of universities in the USSR, with up to 23 institutes of higher education.

Making a life for himself and his family

Both Jamal and his brother enrolled in the Kharkov Civil Engineering Institute. Jamal confesses he had a bit of help from his brother for the mathematics exam – in fact, Fakhraddin, being his indistinguishable twin, took Jamal’s place during both the written and oral examination. “He’s a fine fellow, he got good grades”, – says Jamal “but when he took his own exam, he got worse grades!”.

Jamal pursued a degree in Industrial Civil Engineering and became a certified specialist. He was sent to work in Ural’sk, a city in the northwest region of Kazakhstan. During his career, he evolved from foreman to chief engineer, to head of department, and to responsible organizer of the Regional Committee of the Komsomol for student construction teams. During this period, Jamal was also an instructor of the City Party Committee.

Then, his career was shortly interrupted by military service. For a while, Jamal served in the Soviet Army as an officer. After, he returned to work as an instructor of the City Committee of the Communist Party and assistant to the Chairman of the City Executive Committee.

Jamal only returned to his native country of Azerbaijan in 1987. Since 1992, he has been working for a trade union and is proud of what he has accomplished, especially of his family. “I have a wonderful family. I have two daughters and one son. Both daughters are surgeons, and my son studies at an institute and works as a manager in a foreign company”, – he adds.

Although one of his first jobs as a youth was to be a market trader, Jamal only became acquainted with StreetNet International through Pat Horn, founding International Coordinator and current Senior Advisor of the organization in 2011. Pat was hosting an event on the informal economy in Tbilisi, Georgia, and it was through that event that Jamal discovered the activities of the organization. After a certain time, Xhidmat-ISH, or the Federation of Trade Unions of Azerbaijan, became a StreetNet affiliate in 2012.

However, Jamal seems to only have understood the impact of StreetNet International after attending the International Congress in Chile, 2013. “We realized the importance of this organization in the life of street and market vendors, especially those working in the informal economy”, – he explains. “When we joined StreetNet and deeply studied the experience of other countries, we realized that we also have a lot of problems with humiliation and violence towards street vendors. It is not uncommon for them to be driven from the places of trade, their goods are destroyed, etc. All this urged ” Xhidmat-ISH to more purposefully wage struggle for the rights of street and market vendors”.

One image that impressed Jamal and helped him to understand the plight of street vendors in his region was seeing them selling their good in the rain, completely lacking in adequate conditions to work. Jamal, along with his comrades, decided to take action.

They turned to the local municipality to advocate for basic conditions that could respect the dignity of these workers. “Surprisingly, our persistence led to action”, – says Jamal, proudly, “and within a month a shed and toilet were built for these market vendors”. Then, they invested in the placement of street vendors in markets in some regions of Azerbaijan, allowing them to work in equal footing with other traders.

Since he was a young boy, Jamal has always been concerned about family responsibility. Therefore, it is no surprise that he advises young street vendors, and local public servants who have contact with street vendors in their work, to “never forget, under any circumstances, that every vendor has a responsibility to provide food for his children and his family”. Jamal encourages young street vendors to be “merciful and mutually respectful, fight for your rights without humiliation and insult”!

For Jamal, awareness-raising is the key to advocate for the rights of street vendors. As he states, there is a need for more “advocacy work in order to bring information to the world community and relevant world organizations about the sad, horrific situation of street and market vendors and about their global significance in our present life”. Solving the problems of street vendors, he explains, is an important step towards combating poverty and hunger on a global scale.

When Jamal was a young boy in the village, he remembers looking at the stars and thinking about travelling the world: “When I saw an airplane flying in the sky, I always thought about whether I would ever be lucky enough to fly in this sky on an airplane, and even more so far away?”. That young boy would certainly be pleased to know how far Jamal has traveled, and how much he has achieved.